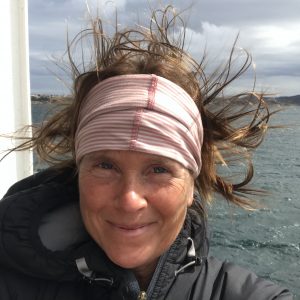 Fran is a an experienced kayak guide working in Antarctica and Scotland.

Though originally from the flatlands of east England, Fran has lived in the Highlands of Scotland for the past 30 years where she started her career in outdoor guiding and instruction. She loves the wild and remote places of the world – including her own backyard – and is happiest kayaking, climbing, biking and skiing in these places. Her most memorable sea kayaking trip was a summer spent travelling up the Inside Passage from Vancouver to Juneau with a team of mixed ability paddlers. Overall though she thinks that Scotland is hard to beat for its combination of accessibility and remoteness! In 2013 she joined the British Antarctic Survey first as a Base General Assistant and then as a Field Guide, which included a winter season at Rothera on Adelaide Island from 2014-16. She managed to avoid most of the pandemic by virtue of being stationed at King Edward Point on South Georgia for 2020. She splits her time between kayak guiding in Antarctica and working for BAS in the austral summers, and summer guiding on land and sea in the boreal summers.