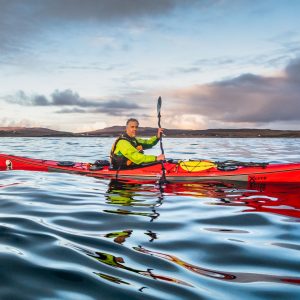 Graeme began kayaking (and caving) at an early age and is now an Advanced Water Sea Kayak Leader.

After gaining a BSc (Hons) in Zoology from Liverpool University Graeme spent 30 years in Cumbria Police and latterly headed up the Forensic Collision Investigation Unit. Now retired from his first career he is able to share his passions for wildlife, kayaking, caving, mountains and photography.
Graeme is an Advanced Water Sea Kayak Leader and holder of the Level 2 Local Cave and Mine Leader Award. He has caved extensively in the UK, Eire and Northern Spain and explored the coasts and islands of the UK by sea kayak. He is also a member of Kintail Mountain Rescue Team.